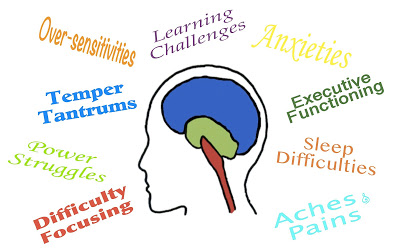 Whack-a-mole. Remember that game? You know the one- people play it at carnivals and amusement parks. You hold that big soft hammer looking thing and try and “whack” as many moles as you can in a certain amount of time.

Ever felt successful at it?

Maybe you were able to hit some of those pesky moles and score pretty well. But darn it- each time you hit one, another one popped up, right? Or maybe even two- or THREE!!

When you have a child that struggles, sometimes it feels like we’re playing whack-a-mole. It certainly felt like that to me with my son.

Just when you think you figure one thing out- something else pops up.

If it sounds familiar- have you ever stopped to think about why? What is causing the whack-a-mole in your child’s life?

We look to the brainstem.

Just like I explained in my post “Roots“, the brainstem supports us- right from the beginnings of our development. The brainstem is where those automatic, stereotyped movement patterns of the primitive reflexes are housed.

When you’re playing whack-a-mole, you’re only hitting the surface of what’s actually going on. You’re “whacking” back the symptoms of a disorganized brain.

It’s like when you have a cold. You might take cold medicine to knock back the symptoms, and you might feel better for a bit. But is the cold really gone? Chances are, it’s not. The cold is still there- lurking in the background- waiting for the medicine to stop working and then- POP! There it is again. Just like it was before the medicine. Sometimes- it’s even worse because you masked the symptoms of the cold so that you could go about your day and didn’t rest like maybe you should have!

Get to the root cause. That’s what we do here at Brain Fit Academy. We work on the brain from the bottom up, to strengthen and organize the brainstem so that that whack-a-mold scenario? It doesn’t happen as often. Or maybe it happens in less intensity. Or maybe- doesn’t even happen at all!

Let’s keep the whack-a-mole game as just that- a game. Head to the carnival or amusement park to play it.

Here- at home, with your child? Get to the root cause. The primitive reflexes.

Call us. We can help.